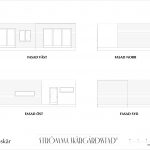 This house has been adapted to the bedrock which is found directly north of the house at a slightly higher level. In the other three directions, the terrain is relatively flat. 2 bedrooms, a fully equipped bathroom with a shower and open area with a living room and a large sliding door to a selected area for a deck.
An added benefit is the roof window of the entrance which gives extra light and an additional dimension to the planning.
Like the other larger houses, this house has plastered elements on the facade to create an interesting architecture.

This condo´s own plot of land comprises an area of bedrock with moss in a relatively flat terrain in the west, south and east. To the north of the house you get to a higher plateau on the mountain hills from which it slopes down further north. On request, a lawn can be had both in the south / west and east of the house if you do not want to build a deck or keep the natural habitat with moss and bedrock.